The Liberal Party and the Public Service: A History Lesson

Today Justin Trudeau published an open letter to public servants attempting to convince them what a friend they have in the Liberal Party.  I can only assume that Mr. Trudeau is hoping that public servants have forgotten or are ignorant of the Liberals track record.

In the not so distant past (at least in historical terms) there was a wildly unpopular Conservative government that used legislation to impose its will on public servants and by-pass collective bargaining (sound familiar).  And then there was an election, the Liberals swept to power and all the public servants lived happily ever after...  Not so much.

The year was 1993 and the Liberals social welfare platform contributed strongly to its victory.  But once in power, the Liberal government reneged on most of  its election promises and turned on its own employees, by not only sacrificing their collective bargaining rights it ignored pay equity legislation and eliminated five times as many jobs as the Conservative government they replaced.

Given how many times Mr. Trudeau has flip-flopped on his positions during this campaign these sentiments, on his commitment to Canada's public servants are best taken with a grain of salt and maybe a shot of tequila. 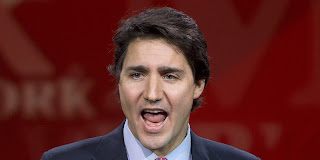