Many feel bad for the Royal Bank Employees being replaced by temporary foreign workers however they are only the latest example of what is wrong with the Temporary Foreign Worker Program in Canada.

Canada's Foreign worker program has been criticized greatly by the NDP for its potential for abuse.  The NDP on several occasions when discussing the legislation policing Foreign workers have stated time and again that there was nothing preventing companies operating in Canada from firing Canadian workers and hiring temporary foreign workers to replace them. 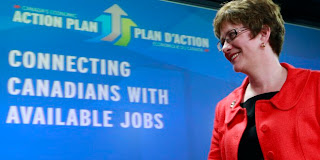 Those are the kinds of immigration policies that we do not agree with, including this bill.

Mr. Speaker, what is clear is that Canadians cannot trust Conservatives.

Companies are planning to hire as many as 2,000 temporary foreign workers to work in B.C. coal mines. Conservatives have encouraged more foreign workers by allowing companies to pay them 15% less than Canadian workers. This is from the same government whose junior minister of finance told out-of-work Canadians that they should go and get a job in the mines.

Why will the government not defend Canadian workers?

Mr. Speaker, we are doing exactly that. For any company to bring in offshore workers, they must first prove that there are no Canadians available to do the job. We want to make sure that Canadians get first crack at every job in this country.

They want me to talk about Bill C-45. So I will talk about temporary foreign workers. Does it make sense for us to bring in temporary foreign workers who will be paid 15% less than Canadians? What does this mean? It means that employers will be able to keep temporary workers in their businesses. There is a reason why Canadians who go to work in Cap-Pelé are sent home after working 20 hours. Temporary workers can stay for 40 hours.

There is a reason that, in Caraquet, some workers are not called back to work in a fish plant. Temporary foreign workers have taken their place because the employer can pay them 15% less and make them work in a different way given the regulations in effect in New Brunswick. There are laws that are not obeyed in New Brunswick. If the poor foreign worker who wants to earn money disagrees with what his employer says, the employer calls Immigration Canada and says that the worker he got is not working out.

How can employers bring temporary foreign workers to their workplaces when the unemployment rate in Acadie—Bathurst is 20%? That is crazy.

Here is what the Conservatives are doing with this bill: they are opening the door to what I call "foreign worker slavery" and to the loss of jobs for local workers. Then they turn around and tell us that they want our people to work.

Here is what they really want: they want our people to go work out west, and they want foreign workers to do seasonal jobs, pay taxes and pay employment insurance premiums before being sent back to their country without receiving any benefits at all.

Mr. Speaker, a new report suggests unscrupulous agencies are charging thousands of dollars to recruit lower wage, temporary foreign workers to work in B.C. coal mines. It is no wonder companies are turning to foreign workers when the Conservatives allow them to pay them 15% less than Canadian workers.

Why is the government undermining Canadian workers? Will the minister stop this abuse of temporary foreign workers and start focusing on creating jobs for Canadians?

Mr. Speaker, we believe that Canadians should always have first crack at every job opportunity. In fact, there is a requirement that if a company is bringing in workers from offshore, the company must first prove that it has done extensive advertising and attempts to recruit Canadian workers unsuccessfully.

Mr. Speaker, last Friday officials of the northern B.C. mining company that hired hundreds of temporary foreign workers told a federal court that they did advertise those jobs in Canada. However, what they failed to say was that they tried to squeeze Canadian workers, offering $17 less per hour than the standard rate. Now a review of the program will not help these workers. Will the minister immediately suspend these temporary foreign worker visas so Canadian workers will have a fair chance to apply for these jobs?

Mr. Speaker, Canadians must have first crack at all the jobs that are available in this country. In terms of this specific case, because it is now before the courts it would be inappropriate for me to comment any further.

Ms. Chris Charlton (Hamilton Mountain, NDP):
Mr. Speaker, two weeks ago in a statement about the 200 B.C. mining jobs that went to temporary foreign workers, the minister said that she was not satisfied with the process. The company said it followed the rules and would now like to know what she meant, and so would Canadians.

Is she saying that the company was dishonest in its application or is she admitting that she did not apply her own rules appropriately?

Hon. Diane Finley (Minister of Human Resources and Skills Development, CPC):
Mr. Speaker, our goal is to make sure that Canadians get first crack at every job that is available in this great country. That is why employers who want to bring in temporary foreign workers are required to prove that they have made a legitimate and responsible effort to find qualified Canadians.

Ms. Jinny Jogindera Sims (Newton—North Delta, NDP):
Mr. Speaker, the minister has already admitted that the process is not working. British Columbians were passed over by a process the government implemented, and this from a party that suggested the unemployed should go and work in a mine.

Which is it and why will the minister not suspend those visas?

Mr. Speaker, we do want to make sure that Canadians get first crack at all the jobs that are available in this country. That is why we require employers who want to bring in foreign workers to prove beyond a doubt that they have conducted a responsible search for qualified Canadians.

Mr. Speaker, the depth of Conservative mismanagement of the temporary foreign worker program is truly shocking.

Documents released on Friday show major problems with the process for approving labour market opinions. For example, the ability to speak Mandarin was one of the listed requirements for the mining jobs in B.C. No wonder the company claims it could not find enough Canadian workers.

Does the Minister of Citizenship, Immigration and Multiculturalism believe rubber-stamping ensures a strong system? Will he suspend the visas while this program is being investigated?

Mr. Speaker, the requirements as described by the member opposite are totally unacceptable.

The official languages of this country are English and French, period. That is what is required to do a job here in this country as far as we are concerned.

We want to make sure that Canadians get first crack at every job available in this country and that temporary foreign workers are only brought in when efforts to find Canadians to do the job are unsuccessful.

Even though the government likes to make up figures for some kind of job and economic record that really come from science fiction, the reality is that most of the jobs created in our growing population are part-time or temporary. We have replaced full-time family-sustaining manufacturing jobs with temporary and part-time work, and people are trying to cobble together a number of different part-time jobs to try to make ends meet.

In the midst of this, we have seen an unprecedented expansion of temporary foreign workers. These workers are brought in and are not subject to our health and safety standards. We have seen so many cases of abuse in British Columbia and right across the country. Temporary foreign workers are simply being pulled away from the health and safety standards that we have, are paid far below our Canadian standards, are given no rights and are sent home at the end of whatever contract they have. This explosion of temporary foreign workers is something that we see everywhere, whether in construction projects where these workers are housed in poor living conditions or the local Tim Hortons where they are brought in and put into very difficult conditions.

I will give an example. I know of a case where temporary foreign workers were brought in to work at a business in one particular area for a per diem. Because there was no inspection process, no oversight whatsoever, those temporary foreign workers then had to pay an extraordinary compulsory amount to their employer to sleep in a bed in a small basement at night. In other words, they became indentured servants where they were ordered to spend all of the money they earned in the day on astronomical fees for their poor living arrangements. When they tried to move out, the owner told them they would have to keep paying the hundreds of dollars they were being charged every week for their accommodation, even though they were no longer sleeping in those tiny little beds in the basement. That is just one example of the many abuses we are seeing.

Under the current government there has been a widespread explosion of temporary foreign workers being brought in with no monitoring, safety standards and oversight provided, or responsibility taken by the government. That is simply not reflective of Canadian values. That is not reflective of building the kinds of communities that we want to see. It is not reflective of Canada's tradition, wherein new Canadians come here and join our communities, bring their families, contribute and work hard, and as a result the whole community and whole country prospers. This is just one aspect of what has been a very mean spirited approach by the government not in keeping with our fundamental values.