Mr. Bruce Carson has a history of fraud convictions and was convicted on five counts dating back to the 1980s and 1990s before he was hired as an advisor to PM Harper. 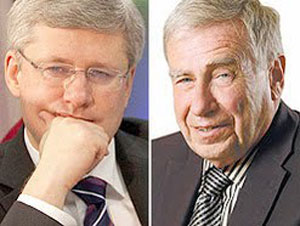 The Prime Minister still has not explained why he would hire a convicted fraudster to be his chief policy analyst and on more than one occasion, has claimed ignorance to Mr. Carson's criminal background.Given the intense security screening that is necessary to work in the PMO, including a criminal background check, this claim does not seem credible.


"The prime minister still hasn’t explained, or taken any responsibility, for how his inner circle included someone with previous criminal convictions for fraud — who then went on to allegedly use his political connections to take advantage of impoverished First Nations communities for a quick buck," said Charlie Angus in a written statement.

Since this story broke back in March of 2011 we have also seen Ministers in Mr Harper's Cabinet linked to instances of ethically questionable actions.

What are Stepen Harper's Standards? Felons insided the PMO